On the Media
Latour:
Rethinking ecological crisis from the ground down

Professor Bruno Latour who visited us in July was featured in the English language newspaper The Japan Times on Sunday on August 14, 2016. The interview was conducted for about an hour at the lobby of the Tokyo Station Hotel in Marunouchi during his stay in Japan in July. Science journalist, Mike Sunda, wrote a very extensive and fruitful article, using quotes from the interview, where Professor Latour talked about discussions on the new regime surrounding relations between today’s ecological reality and human societies, which he talked about in our class “Introduction to Art and Culture in the Global Age” and his public lecture. He also mentioned about his thoughts on Fukushima and its disaster-striken area.
The followings are from some of his words quoted in the article: 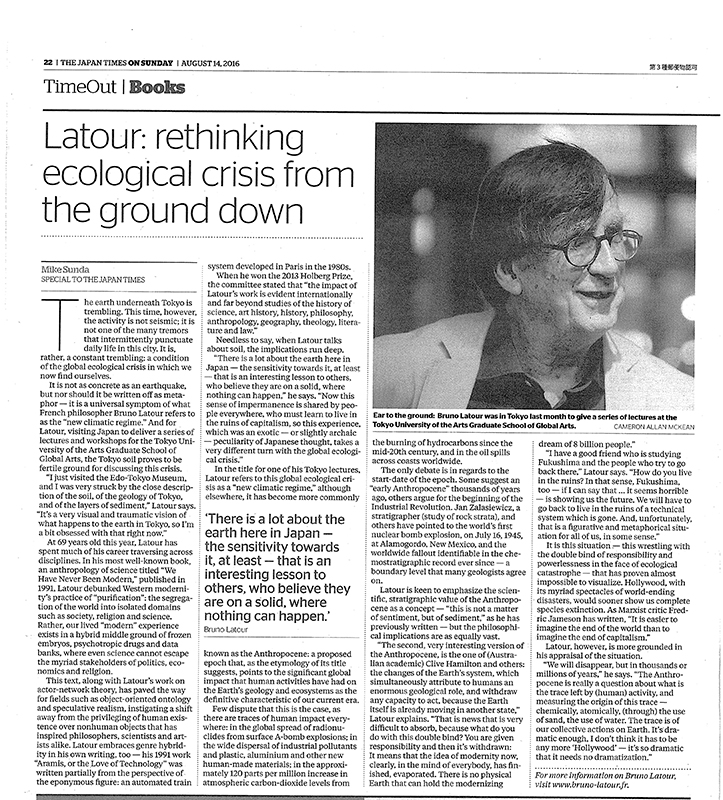 “There is a lot about the earth here in Japan — the sensitivity towards it, at least — that is an interesting lesson to others, who believe they are on a solid, where nothing can happen.”

“Now this sense of impermanence is shared by people everywhere, who must learn to live in the ruins of capitalism, so this experience, which was an exotic — or slightly archaic — peculiarity of Japanese thought, takes a very different turn with the global ecological crisis.”

“I have a good friend who is studying Fukushima and the people who try to go back there”. “How do you live in the ruins? In that sense, Fukushima, too — if I can say that … it seems horrible — is showing us the future. We will have to go back to live in the ruins of a technical system which is gone. And, unfortunately, that is a figurative and metaphorical situation for all of us, in some sense.”

“The Anthropocene is really a question about what is the trace left by (human) activity, and measuring the origin of this trace — chemically, atomically, (through) the use of sand, the use of water. The trace is of our collective actions on Earth. It’s dramatic enough, I don’t think it has to be any more ‘Hollywood’ — it’s so dramatic that it needs no dramatization.”