Report
How Do We Land from the Sky of “Modernity”?
After Listening to Lectures by Professor Bruno Latour

This essay is based on lectures by Professor Bruno Latour as part of the series, Introduction to Art and Culture in Global Age undertaken at the Graduate School of Global Arts, Tokyo University of the Arts. Informed by the lectures by Latour, this essay mainly aims to report “Reset Modernity!”, his most recent curatorial practice at ZKM, Center for Art and Media, Karlsruhe, Germany. At the end of this essay, it also analyze the different attitudes towards problems of modernity by analyzing and referring to the unique case of the modernization of Japan.

“Thought Exhibition” is the main methodology which Latour adopts for his curatorial practice. This methodology follows the term “Thought Experiment” in the context of science. Thus, it assumes the fictional condition which may possibly happen in the future and attempts to approach that condition through the experiment of thoughts. Although this methodology is archived only under “fiction”, he insists that “Thought Exhibition” still functions as significant curatorial practice through the form of exhibition. One of the thought exhibitions he has realized is Reset Modernity! (2016). This exhibition strongly follows his lifetime research to reset our disorientated compass in the era of “modernity”, a theme he has been exploring since writing one of his most important works, We Have Never Been Modern (1991). Latour states that “Reset” here is an expression or “a way to register again the ambiguous signals for those who have never been modern”. Therefore, this exhibition attempts to reset the equipment of “modern” that registers our feelings or sensations within the framework of “modernity”.［＊1］

This exhibition is mainly comprised of 6 procedures (sections) to reset the instruments of the modern regime that disorients us. Moreover, a portable book called “Field Book” is provided for the audience in order to promote interaction between exhibition and the viewers. It provides not only the description of the presented works but also explains the reason why the curators selected those works as well as gives discussion topics to help self-education of the audience. 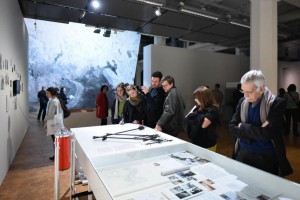 
Organizing the exhibition in this manner enables the (western) audience to reconsider the relationship between such the “western gaze” and “representation”, the distinction between “observer” and “nature” under the notion of “the sublime” and various frameworks of modernity and “Land” itself. It is noticeable that this exhibition reflects the strong interest of Latour and his team in the recent controversial discussions on the concept of “Anthropocene”. Thus, inevitably one can describe Reset Modernity! as a critical challenge to the problems of “modernity”, due to its differentiation of such as subject and object, society and nature or human and non-human.
This essay has looked at the “Thought Exhibition” led by Latour and how it challenges the problems caused by the regime (or rule) of modernity. Latour also mentioned in a different lecture that the “Globe” as a dream project of modernity has failed and there is a worldwide desire to go back to the “Land of Old”. Amid this, the earth itself or “Gaia” has been ignored in between these two opposing vectors. Therefore, he persistently asked one question through his lectures. “Where do we land?” In other words, “How do we land (touchdown) from the fictional sky of modernity?”
It is feasible to mention that in these circumstances Japan holds a unique position under this condition as it modernized not through “revolution” but through “restoration”. Referring to Claude Lévi-Strauss’ analysis of Japanese culture, Japan achieved modernization without severing the continuity between its traditional mythical cosmology and history as a modern nation style and thus, Japan has somehow been able to manage the balance between traditional value and rapid growth of science and technology.［＊2］This unique modernization has its roots in Japan’s singular and strange creativity in juxtaposing and absorbing the two opposing extremes such as awe of animistic thoughts and radical technological reformation. Therefore, if one follows Latour’s discussion of “hybridization”, it could be said that the very structure of Japanese modernization is one built on a process that in itself has been fundamentally “hybrid”. This extraordinary Japanese cultural background has been producing and updating numerous “hybrids” while also managing to retain its identity. It is probably reasonable to say that this technique of “landing” could be one of the reference points to approach the several problems of “modernity”, of which Latour spoke of during his lectures.