Inter-Resonance: Inter-Organics, the second iteration of the four-year collaborative project with Sharjah Art Foundation called Sharjapan, seeks to highlight the distinctive attributes of Japanese art from a contemporary perspective through a showcase of performance and sound art. In art historical terms, when it comes to the three-dimensional arts (spatial arts) as opposed to the temporal arts, Japanese artists have been said to excel at the latter rather than the former. While the same might be said of performance and music, including the traditional arts of Kabuki and Noh, the emergence of a living generation of Japanese artists of global stature who trace their origins to the photography and films of the 1960s is a manifestation of this tendency. As landscapes in Japan evolve as the result of a mercurial nature and wooden architecture of limited durability, a philosophy of impermanence based on the realisation that things with a visible form will change is connected to a keen temporal sensibility. By extension, perhaps this philosophy is also linked to the art of bestowing a form on time itself.

Shintaichi is a symbolic term in Japanese culture that more or less means ‘embodied knowledge’. While Western thinking tends to make a separation between the intellect and the body, shintaichi posits the body itself as a site for the production of knowledge. For example, the aesthetics that govern behaviour and comportment, as seen in the propriety and etiquette associated with the tea ceremony and flower arrangement, have a deep connection to visual culture. These forms convey something not through words or theories, but through the body. The Japanese do not look only with their eyes; they possess sensors that imbibe information from their surroundings with their entire bodies. Before manifesting itself in a particular form, this information is absorbed not only at a sensory level, but also at the level of consciousness belonging to embodied knowledge.

The environment in Japan is one of rich and abundant nature. Surrounded by oceans and subject to the changes of the four seasons, 80% of the land surface in the country is occupied by mountains. The French philosopher Augustin Berque argues that the Japanese see nature as an extension of their own bodies and society.  Finding it difficult to view this relationship in relative terms, Berque accounts for the unplanned destruction of nature during the rapid economic growth of the 1970s by saying that it occurred ‘in spite of their love for nature’. Another sort of relationship is also at play here, one that is different from the binary Western characterisation of the relationship between nature and society. This mode of thinking has a profound connection to an animism that perceives a spiritual dimension in non-human entities.

The title of the second Sharjapan exhibition, Inter-Resonance: Inter-Organics, Japanese Performance and Sound Art, expresses both kinds of relationships: our relationship to sound and non-material things and our relationship to our bodies and material objects. ‘Inter-resonance’ also implies ‘intra-resonance’. When different sound sources resonate with each other, they also create a sort of introspective resonance that arises within a single subject, body or organisation. ‘Inter-organics’, on the other hand, refers to the relationship and process of communication that arises between different organisms, including humans, animals, plants and objects.

Long before John Cage’s 4′33″, the Japanese were accustomed to perceiving noise as a kind of voice or music. Matsuo Basho’s famous haiku is perhaps an exemplar of this: ‘deep silence/the shrill of cicadas/seeps into rocks.’ While this particular aesthetic can also be found in the genre of field recordings that flourished during the 1970s, it is the delicacy and diversity of the sounds recorded by Japanese sound artists and engineers that have attracted much attention. In recent years, many younger artists have sought to give form to the voice of nature. Takaaki Umezawa, for instance, records the sounds made by ice melting in polar regions and various snow-covered mountains, experimenting with ways of visualising this phenomenon as an installation. For this exhibition, Tomoko Sauvage has created a sound installation that uses a hydrophone to record and recreate the sounds made by a chunk of ice hung from the ceiling as it melts and falls into bowls of water. The sounds produced by several bowls resonating in the space evoke a sense of both beauty and transience while also concealing a latent horror suggested by the apocalyptic music being played out by climate change at a macro level. 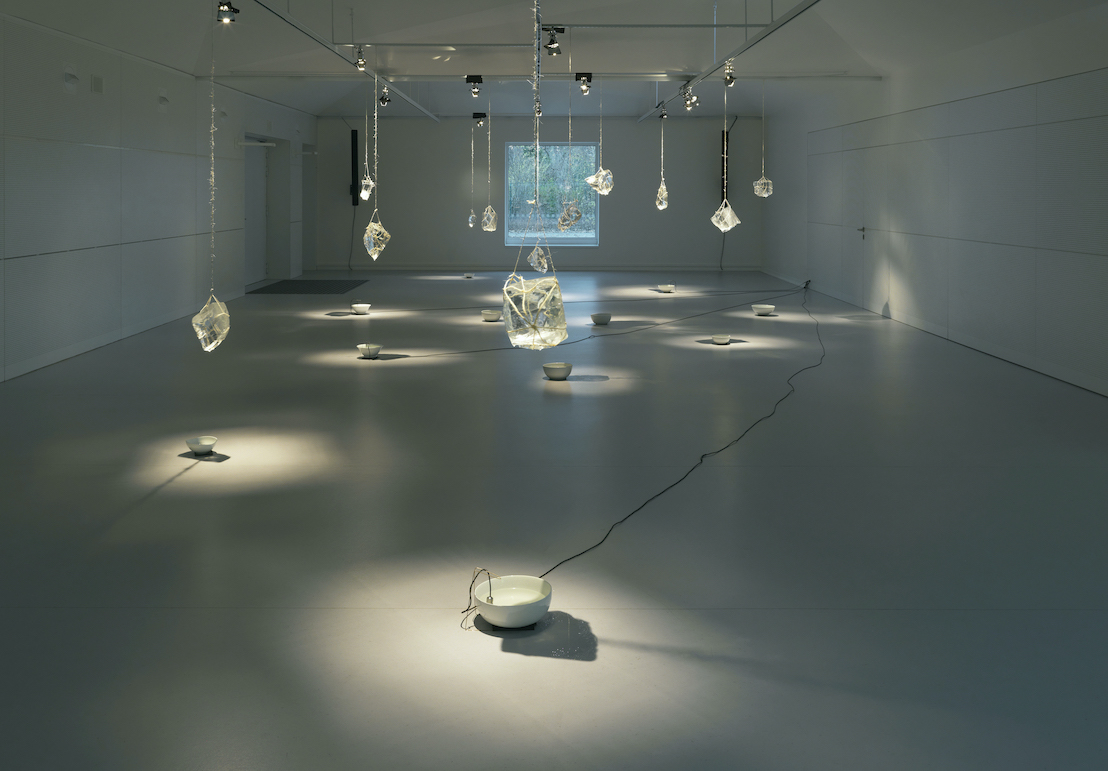 Yuko Mohri turns the invisible phenomena and energies that surround us into sounds that do not quite add up to a field recording. By connecting things, found objects and instruments to wires and magnets with electric currents passed through them in free and unrestrained configurations, Mohri causes them to produce a variety of sounds and vibrations. Her work makes visible the drifting, movement and power of objects as well as the existence of energy flows such as magnetic fields and electricity that are typically unseen. 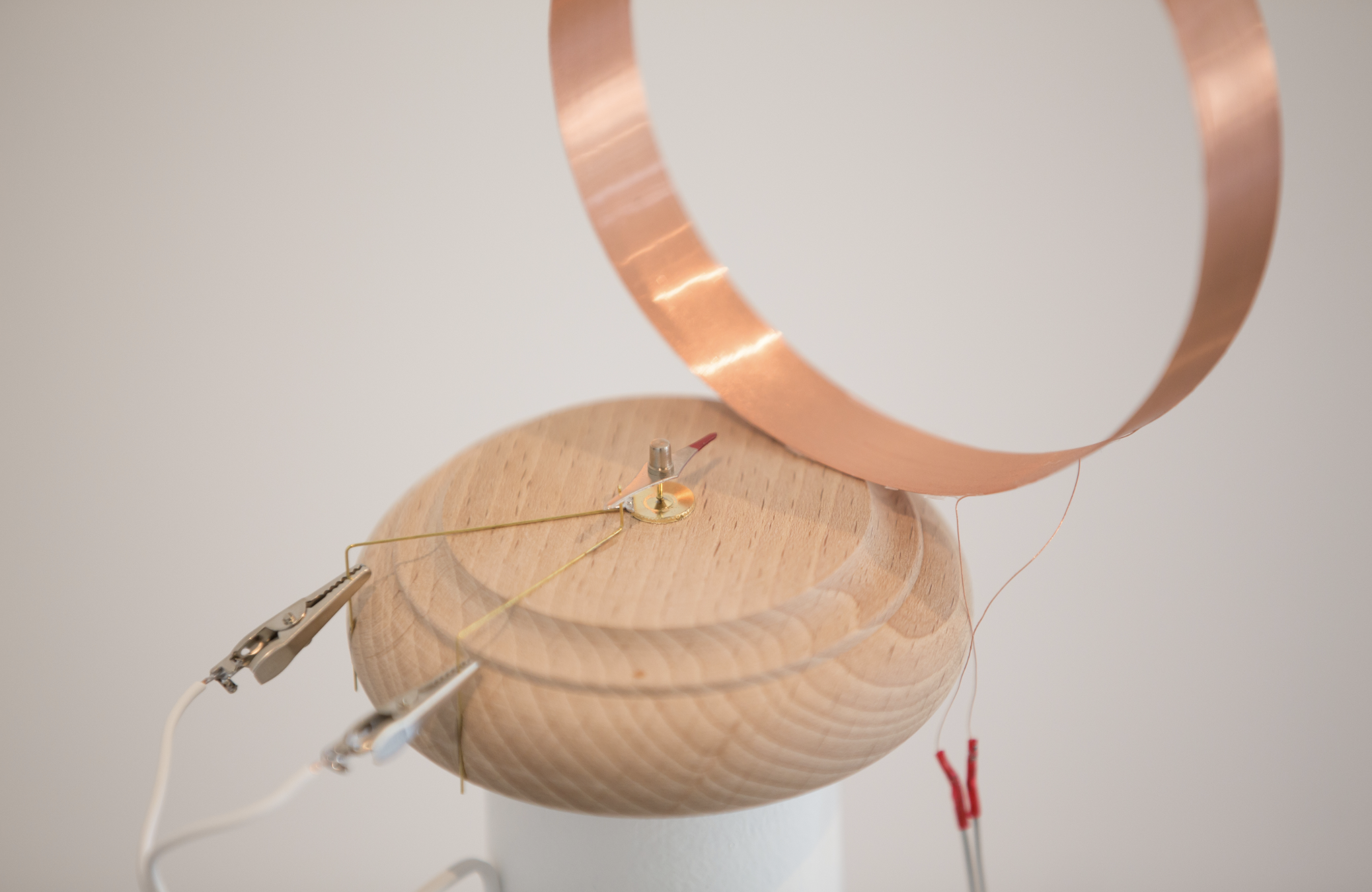 The rotation of the Earth first causes a compass to move and finally works to ring a bell; here we see a shift from the macro to the micro, which moreover is not a matter of chance. Just like John Cage’s spatial notion of the ‘circus’, where a diversity of spectacles unfold, various elements above ground are sampled in order to produce a sense of harmony and resonance. Even as it resembles some kind of post-human landscape, Mohri’s vision is a holistic one where human existence is tolerated.

The idea of a holistic vision also has much in common with the concept of ‘circulation’ that dancer Min Tanaka espouses. Tanaka argues that instead of believing in the philosophy of reincarnation, people during the Jomon era simply gave themselves up to the circulation of life forms in a way that was most analogous to nature itself. In Japan, forests were places where one could establish a connection to animism, non-human living entities such as ghosts and spirits, and alien worlds. Spirits inhabited the Earth, from which raw energies came. Although Tatsumi Hijikata, the founder of Butoh and someone Tanaka sees as his master, was influenced by Western modernity and avant-garde dance, he critically deconstructed these concepts in the 1960s, and sought to locate the origins of his identity in the vernacular body and dance of the Tohoku region. In this respect, Hijikata’s references were the gravity that acted upon the Earth and the bodily gestures of the farmers as they tilled the land. He lowered the centre of gravity of his hips and walked bow-legged. Then he would dance in an extremely slow manner, with a naked body painted white that sometimes came off as grotesque. Like Hijikata’s dance, Tanaka’s performance for Sharjapan does not contain the proportional, balanced Western beauty that rises up vertically, but rather the primitive, savage beauty of a raw existence that is sensitive to all things around it and seeks to nestle up to them and breathe together with them in an intentional way. Tanaka, who continues to dance while farming on land close to the forests of Yamanashi, does not dance at a particular place or location; rather, he dances the essence of the place itself. 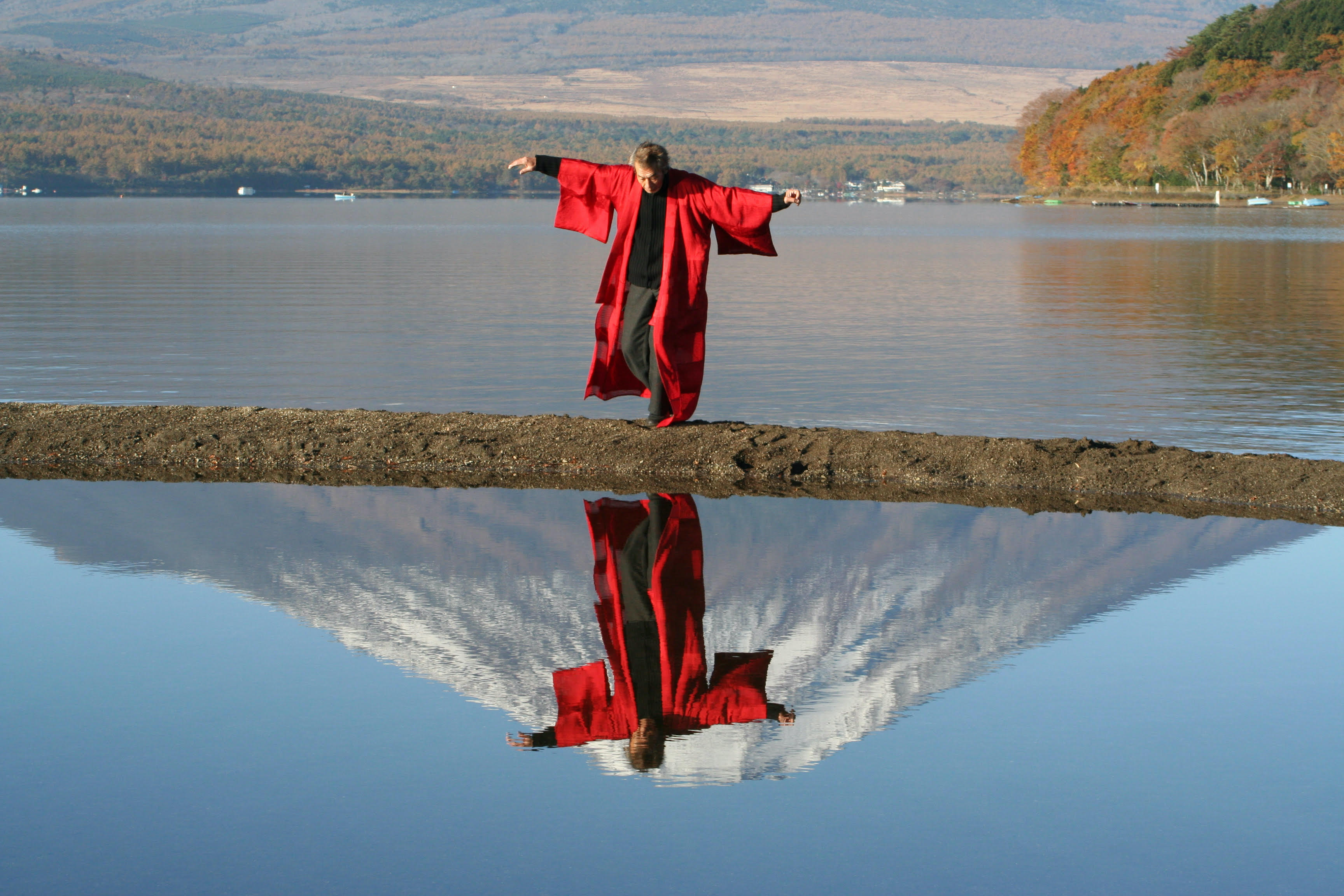 Through Eitetsu Hayashi, reverberations that seem to come from the Earth itself are channelled in the form of solo performances using large taiko drums. In these performances, Hayashi faces the surface of a drum, his back turned to the audience with his hips lowered, back straight and arms raised aloft for anywhere between 30 minutes to an hour, repeatedly beating away in a manner that radiates a fierce, sublime energy. 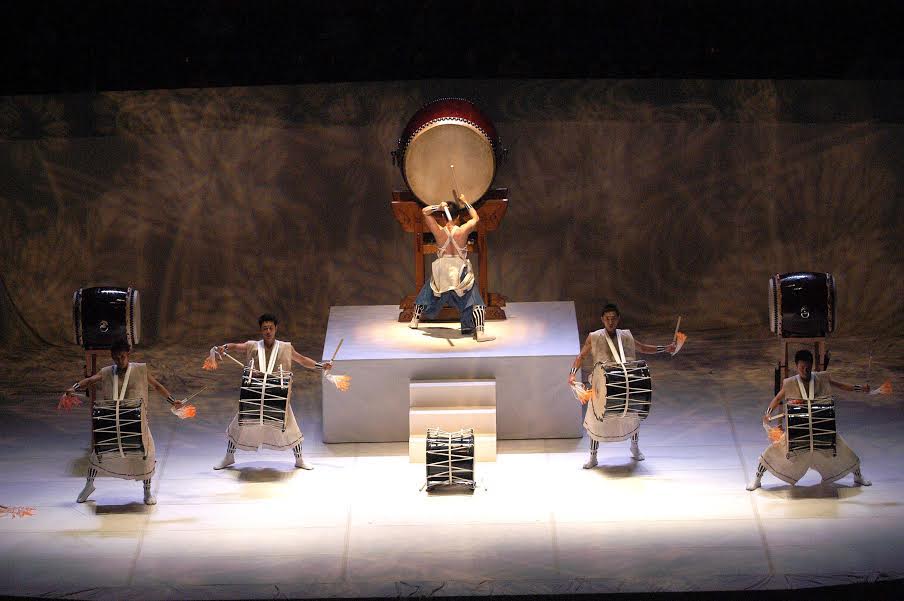 Mio no Hasu Photo by S.Takehara

Animistic modes of thought also extend to machines and robots,and the android opera Scary Beauty is a form of inter-organics. Although the outward appearance of the robot conductor is quite far from a human one, the android Alter was created to verify whether behaviour and facial expressions can cause one to appear human. How can Alter carry out this task, which demands a consummately ‘human’ artistic sensibility and skill? According to artificial intelligence (AI) researcher Takashi Ikegami and musician Keiichiro Shibuya, the imagination of the viewer completes Alter’s humanness. During the verification process, it becomes clear that the acts performed by the conductor that are most easily picked up on by the members of the orchestra have the tempo of breathing. Accordingly, Alter raises its shoulders ‘at the tempo of breathing’ in such a way as to make its large and deep breaths a recognisable trademark. Today, AI has become an important topic for our future, one that is connected to the act of redefining what it means to be human as well as the reconfiguration of perspectives pertaining to a world that we will inhabit together with this AI. 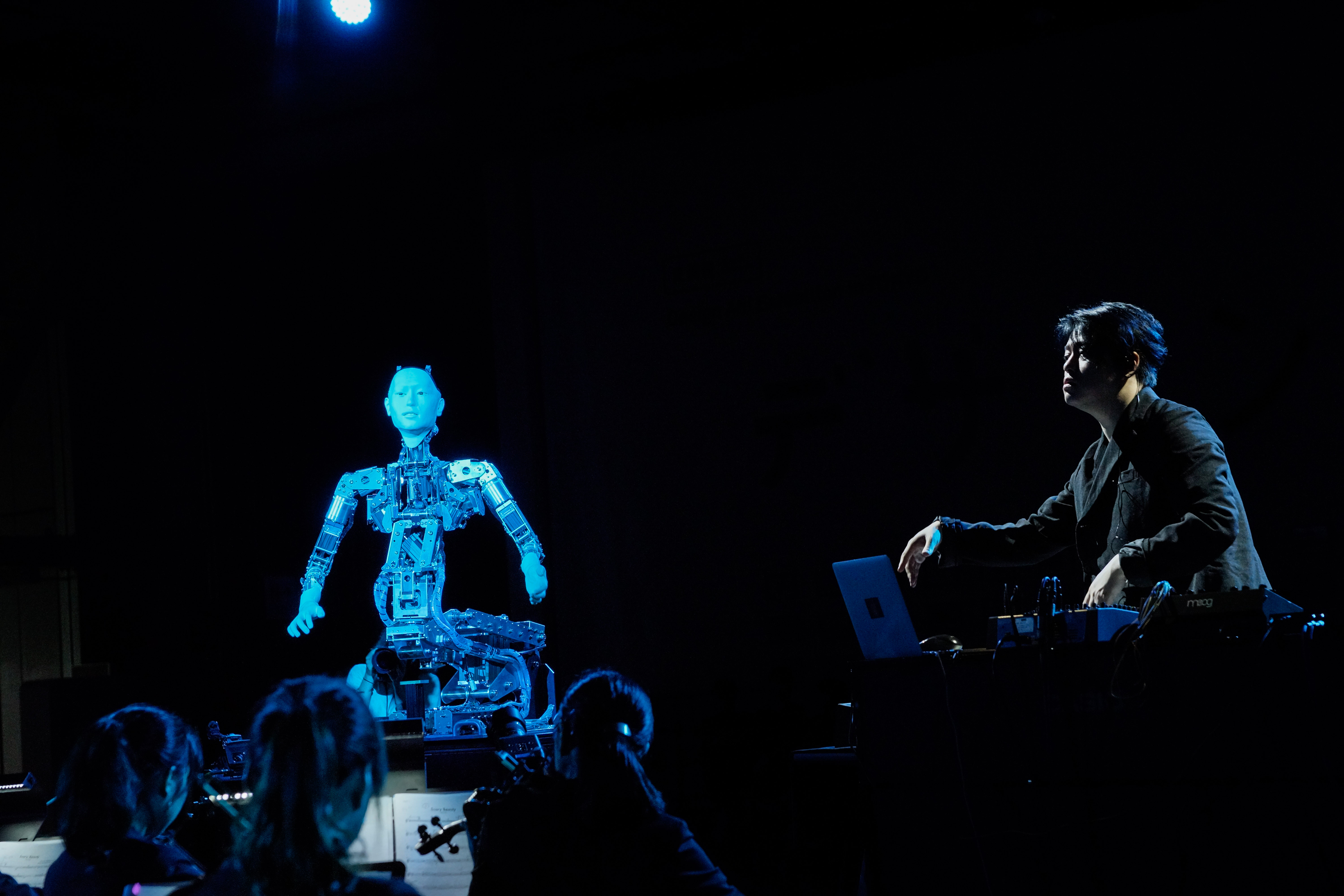 We live in a time of crisis resulting from divisions and environmental problems. Mirai Moriyama’s performance The Investigation on blind/sighted is based on José Saramago’s novel Blindness, which describes a world in which people gradually go blind. Only one person is still able to see—the wife of a doctor. ‘It’s not that we are no longer able to see. These are things that were not visible to us from the very beginning.’ The words of the wife thoroughly encapsulate the situation of the world in which we live. 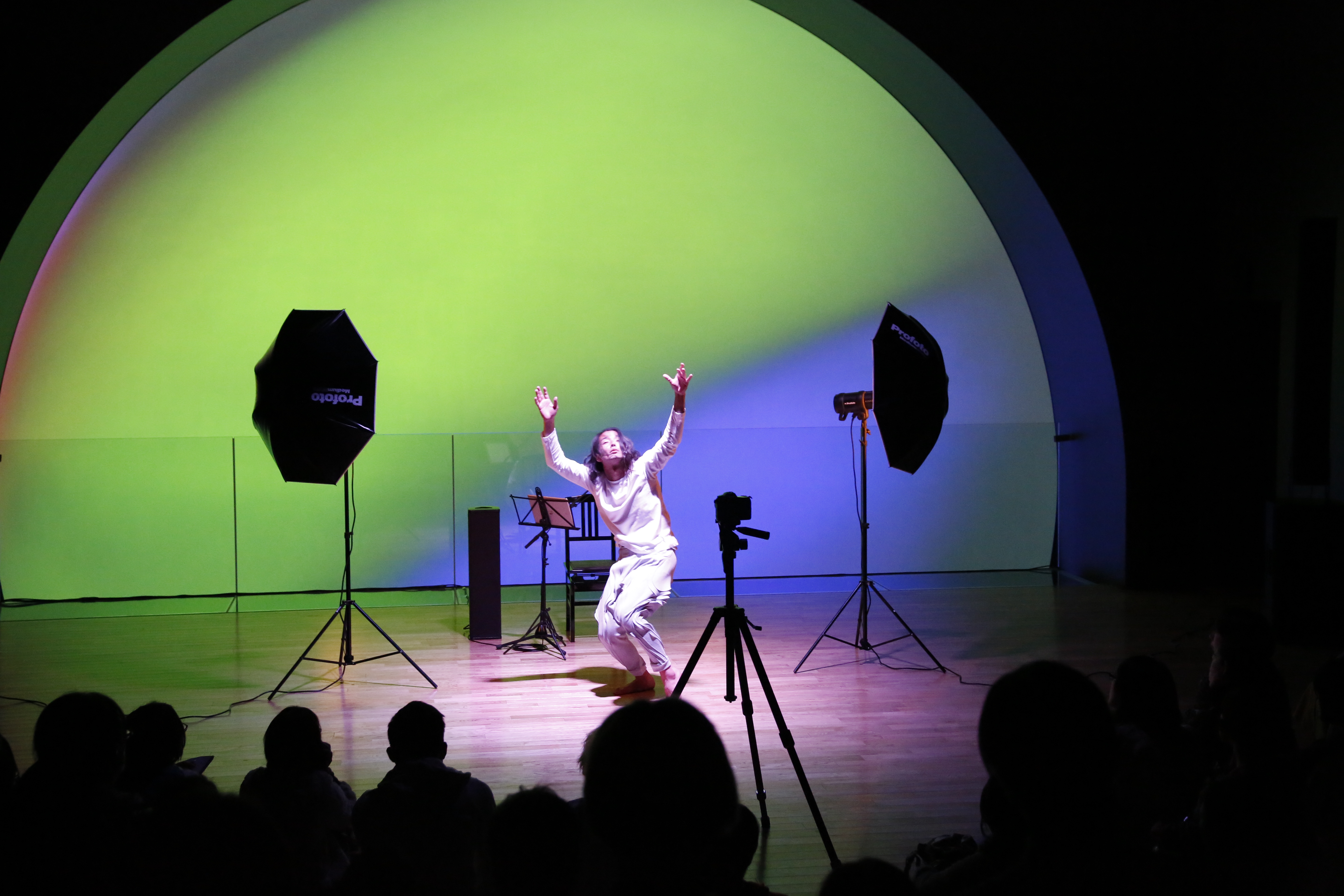 In order for realisation to occur, what is necessary are careful observation, a polishing and refining of our senses, knowledge of our surroundings and the wider world, and consideration of everything that pertains to how we are to live together with others. Can we discern signals amidst the noise and become conscious of how these invisible energies and the relationships between them flow? Through our bodies and behaviour, can we verify the fact that we exist within this circulation, ever conscious that we are just one small part of this world? It is my hope that this exhibition will convey the following message: we ought to stop verifying the highest common denominator of what makes us human and look instead at the lowest common denominator of what connects us to the world.