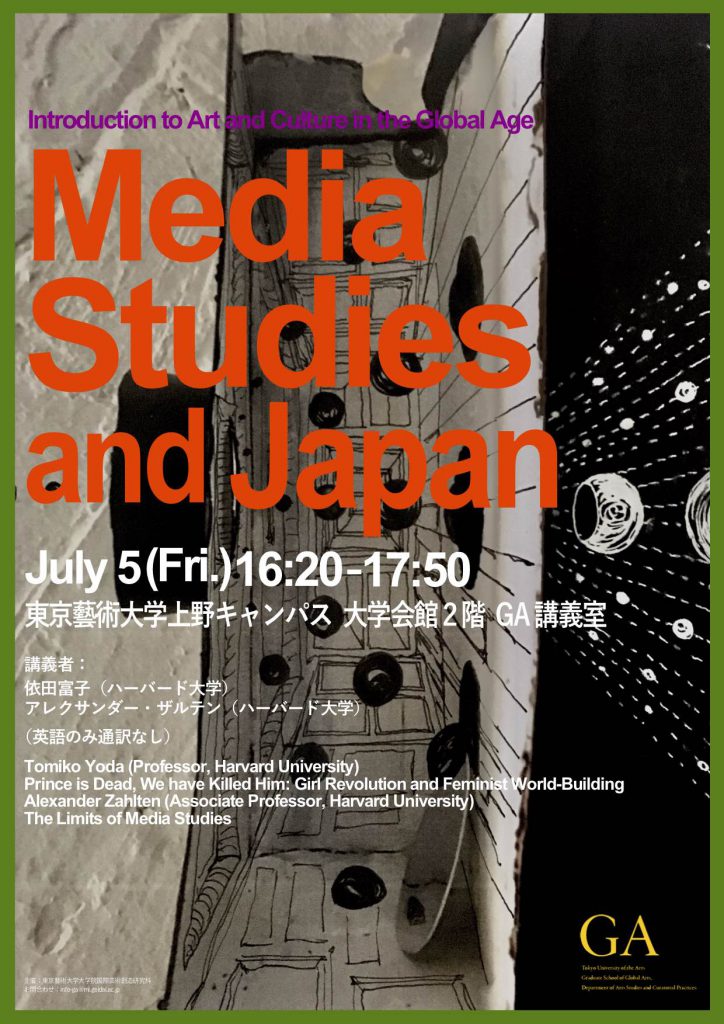 Special Lecture: Introduction to Art and Culture in the Global Age
Media Studies and Japan

“Introduction to Art and Culture in the Global Age” is a series of special lectures organised by the Graduate school of Global Arts. In this course we invite specialist from around the world to give lectures and workshops. This time we welcome Prof. Tomiko Yoda and Prof. Alexander Zahlten for a lecture titled “Media Studies and Japan”.

*Free Admission. No pre-booking necessary. English only: No translation available.

“Prince is Dead, We have Killed Him: Girl Revolution and Feminist World-Building”

Television anime series Revolutionary Girl Utena (1997) is a good specimen of what I refer to as the pop pharmakon. On the one hand, it constantly insists on its own artificiality and frivolity, steeped in the generic cliché of girls’ manga/anime and delivered through the commercial broadc­­­­­ast television network.  At the same time, it explores the possibility of flipping poison into care, inviting the audience to imagine how to break the toxic attachment to “princess narrative,” exposing its hidden rules and mechanisms, including the disavowed and exploited abject femininity.  Revolutionary Girl’s pharmacological gambit took on new forms in the process of its migration to the big screen.  Although the production of theater-release movie version of hit television anime is a common practice, Revolutionary Girl: Adolescence Apocalypse (1999) is neither a sequel, prequel, parallel narrative, spin-off, compilation film nor an alternative ending to the television series.  The film not so much extends the Utena world than render it intensive through non-linear seriality.  In particular, I will argue that in its transition from television to film, Utena franchise shifts its focus from the ideological critique to the question of desire as “the creation of new possible,” the desire for a new world. 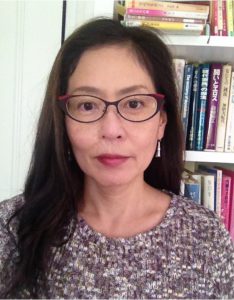 Tomiko Yoda is the Takashima Professor of Japanese Humanities in the Department of East Asian Languages and Civilizations, Harvard University. Her specialization includes Japanese literature, media studies, and feminist studies. She is the author of Gender and National Literature: Heian Texts and the Constructions of Japanese Modernity (Duke UP), and co-editor with Harry Harootunian of Japan After Japan: Social and Cultural Life from the Recessionary 1990s to the Present (Duke UP).

The Limits of Media Studies

What can we learn from media? What does it mean to ask that question as a general question about “media”? The investigation of media and mediation has taken on a new quality in a world where we are always already mediatized and living in and through media technologies. But this means that the limits of media also are in danger of becoming the limits of our world.
By looking at recent histories of negotiating the meaning of media in Japan, this talk will consider what possibilities media studies as a discipline has, which it deliberately shuts out, and where we might retool it. 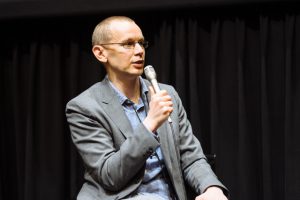 Alexander Zahlten’s work centers on film and audiovisual culture in East Asia, with a focus on Japan. His recent work touches on topics such as film’s transition from environment to ecology and ‘amateur’ film and media production.
Publications include the co-edited (with Marc Steinberg) volume Media Theory in Japan (Duke University Press, 2017) and his monograph The End of Japanese Cinema: Industrial Genres, National Times, and Media Ecologies (Duke University Press, 2017).
He was Program Director for the Nippon Connection Film Festival, the largest festival for film from Japan, from 2002 to 2010.