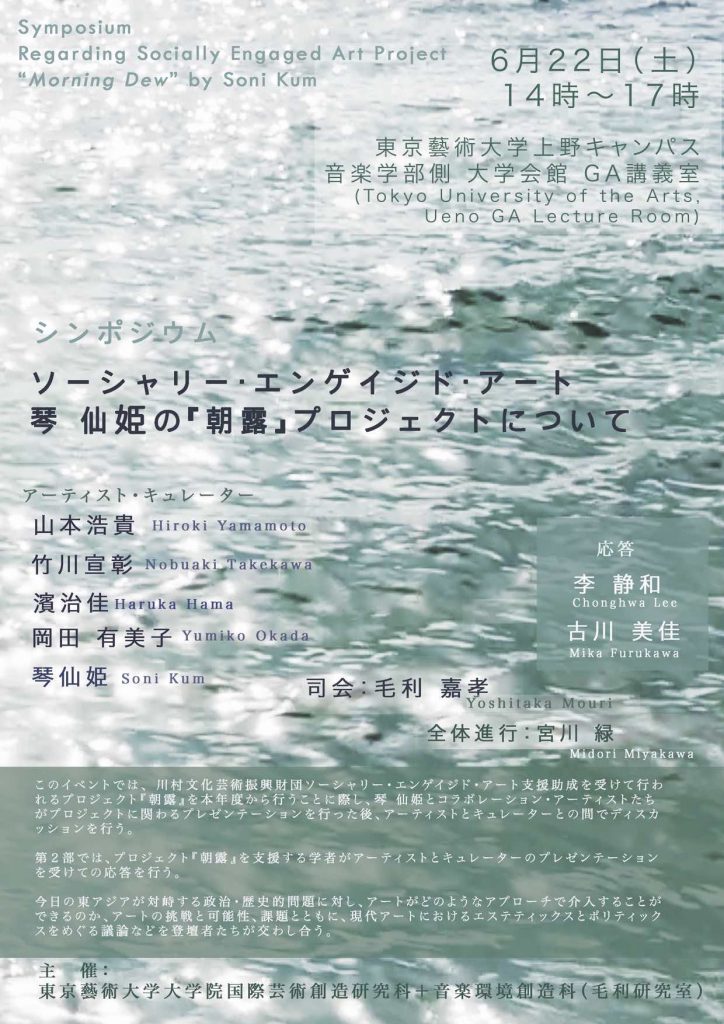 In this event, the artists, curators, and scholars are going to give presentations and have discussions for the art project “Morning Dew”, which will be realized through the support from Kawamura Arts and Cultural Foundation Socially Engaged Art Support Grant, starting from this year.

In the second part, the scholars who supports the project “Morning Dew”, will respond to the presentations given by the artists and the curators at the first part.

We will hold discussions with the presenters and participants regarding the topics such as “how art can intervene the political and social issues facing East Asia”, “what the possibilities and challenges of socially engaged arts are”, and “the relation between aesthetics and politics in contemporary art”.

■ About the project “Morning Dew”
This project is a collaborative art project with North Korean defectors living in Japan, former North Korean Japanese wives, and artists based in Japan.
There are currently about 200 North Korean defectors living in Japan. Many of them are former Korean residents in post-war Japan. During Japanese colonialism, many Koreans immigrated to Japan.
They were living under the condition of severe poverty.
Discrimination against Koreans were almost unbearable to many, since 1959, they started to immigrate to North Korea. They are called “returner” as they were considered to return to their fatherland.
However many of them were from Southern part of Korea and they immigrated to a totally unfamiliar territory.
Total over 90,000 “returners” immigrated to North Korea and the immigration plan was ended in 1984.
The “returners” were forced to live a hard life in North Korea, in the middle of the poverty of the reconstruction from the Korean War. Many “returners” were sent to concentration camps and to rural areas, forced to live severe life.
Many were already sacrificed.
The North Korean defectors living in Japan are obliged to hide the fact that they are from North Korea.
It is because they would experience difficulties in everyday life otherwise.

Under such circumstances, artists individually will go to meet them. We will conduct workshops.
Through the experiences of making artworks together, listening to the stories, and recording the testimonies, the artists will receive inspiration and deepen the connections with them. We will exhibit the work of each artist, defector or Japanese wife in the end of the project. Through the form of exhibitions and symposiums, we intend to generate a new kind of discussion and discourse of socially engaged art in Japan.

The title Morning Dew is the name of the South Korean song that I learned for the first time in North Korean school. Morning Dew symbolizes regeneration of something pure and beautiful after going through dark night of the soul.

Soni Kum
Soni Kum is an interdisciplinary artist who was born and raised in Tokyo, Japan as a third generation Korean.
She received a M.F.A. from California Institute of the Arts in the United States in 2005 and Doctor in Fine Arts from Tokyo University of Arts in 2011. Her work has been exhibited at numerous art spaces and film festivals around the world.
After working for activist art projects with North Korean migrants in South Korea for several years, she begun to explore the theme of ritual in her performance/ installation works. She has taught in several universities in South Korea for 4 years since 2011 and received Excellent Lecturer Award from Yonsei University.

Hiroki Yamamoto
Hiroki Yamamoto was born in Chiba, Japan in 1986. He graduated in Social Science at Hitotsubashi University in 2010 and received an MA in Fine Art from the Chelsea College of Arts, University of the Arts London (UAL) in 2013. From 2013 to 2018, Yamamoto worked as a research fellow at UAL’s Research Centre for Transnational Art, Identity and Nation (TrAIN), where he completed his PhD in 2018. He was previously a research fellow at Asia Culture Center (ACC) in Gwangju, Korea. He is currently a postdoctoral fellow at School of Design, The Hong Kong Polytechnic University.

Nobuaki Takekawa
Nobuaki Takekawa was born in Tokyo, Japan, in 1977 and completed BA in Fine Arts at the Tokyo University of the Arts in 2002. In the same year, he presented his first solo exhibition at Ota Fine Arts (Tokyo). In recent years, he has participated in various exhibitions in Japan and abroad – “Portrait Session” (Hiroshima City Museum of Contemporary Art, Hiroshima, 2007), “Real Japanesque: The Unique World of Japanese Contemporary” (The National Museum of Art, Osaka, 2012), “12th Biennale de Lyon” (Musée d’art contemporain de Lyon, Lyon, 2013), etc. – while also participating in street activities, including protest demonstrations. Takekawa always pursues new methods of expression, questioning the relation between the society/ history and individuals by crossing various boundaries in the field of art.

Haruka Hama
Haruka Hama has been the producer and coordinator of the Yamagata International Documentary Film Festival (YIDFF) since 2001, and director of the festival’s Tokyo office since 2015. She also works for Cinematrix, a film distribution company based in Tokyo. At YIDFF, Hama has coordinated programs such as Okinawa: Nexus of Borders, Ryukyu Reflections, Islands / I Lands – Cinemas in Exile and Vista de Cuba. She is co-founder of the art producer team Cimarcus. She produced the feature-length film Hengyoro by Takamine Go, which premiered in the film program that Hama curated for the Aichi Triennale in 2016.

Chonghwa Lee
Professor at the Faculty of Law, Seikei University. Chonghwa Lee is known for her poetic and philosophical writings dealing with gender and colonial violence, and with the issue of testimony related to the 1948 Jeju Massacre and former “comfort women.”

Mika Furukawa
Born in Tokyo. Researcher for Korean art and culture . Part-time lecturer at Joshibi University of Art and Design.

Yoshitaka Mouri
Born in 1963 in Nagasaki, Japan. Professor at Graduate School of Global Arts, Tokyo University of the Arts. An economics graduate of Kyoto University. Holds a Ph.D. in sociology from Goldsmiths, University of London. Specializes in sociology and cultural studies. Critiques themes of social movements, organization of urban space, and contemporary culture especially contemporary art, music, and media.