Migration and Escape is a discursive tactical radio event initiated by Jong PAIREZ, a student majoring in Research at our Department of Arts Studies and Curatorial Practices, Graduate School of Global Arts, Tokyo University of the Arts. The radio which takes form in a series of research-based collaborative and performative events simultaneously take place both online (www.kosaten.org/radko) and offline (路地と人 Suidobashi) from December 20 until December 27.

Jong PAIREZ, have been conducting research about the politics and aesthetics of precarious working bodies in the country. Using his fascination with the somatic and sonic aesthetics of radio, Jong PAIREZ set in motion an embodied collaborative approach to research by observing precarity in constellation with others who shares the same condition in life as precariats and foreign migrant workers. He approaches his radio project using artistic research and the paracuratorial as a framework to enable the political and aesthetic sensibility of perceiving precarity with others.

Together with a variety of co-authors, the 70 hours live marathon broadcast functions as a collaborative research and cohabitational space between different subjectivities and their cultures (foreign migrant workers/trainee, freeters, hikikomori, etc.). The transitory and volatile space of the tactical radio is where they publicly present a weeklong series of panel discussions, music, experiments, storytelling, workshops, party, etc. We cordially invite you to come and participate in problematizing the following questions together: How do we grieve our precarious lives if we do not recognize the loss of other lives different from us? And what are the radical possibility do we get with estrangement from Capitalism?

*This is organized as the Master Course Special Research Project at the Graduate School of Global Arts. 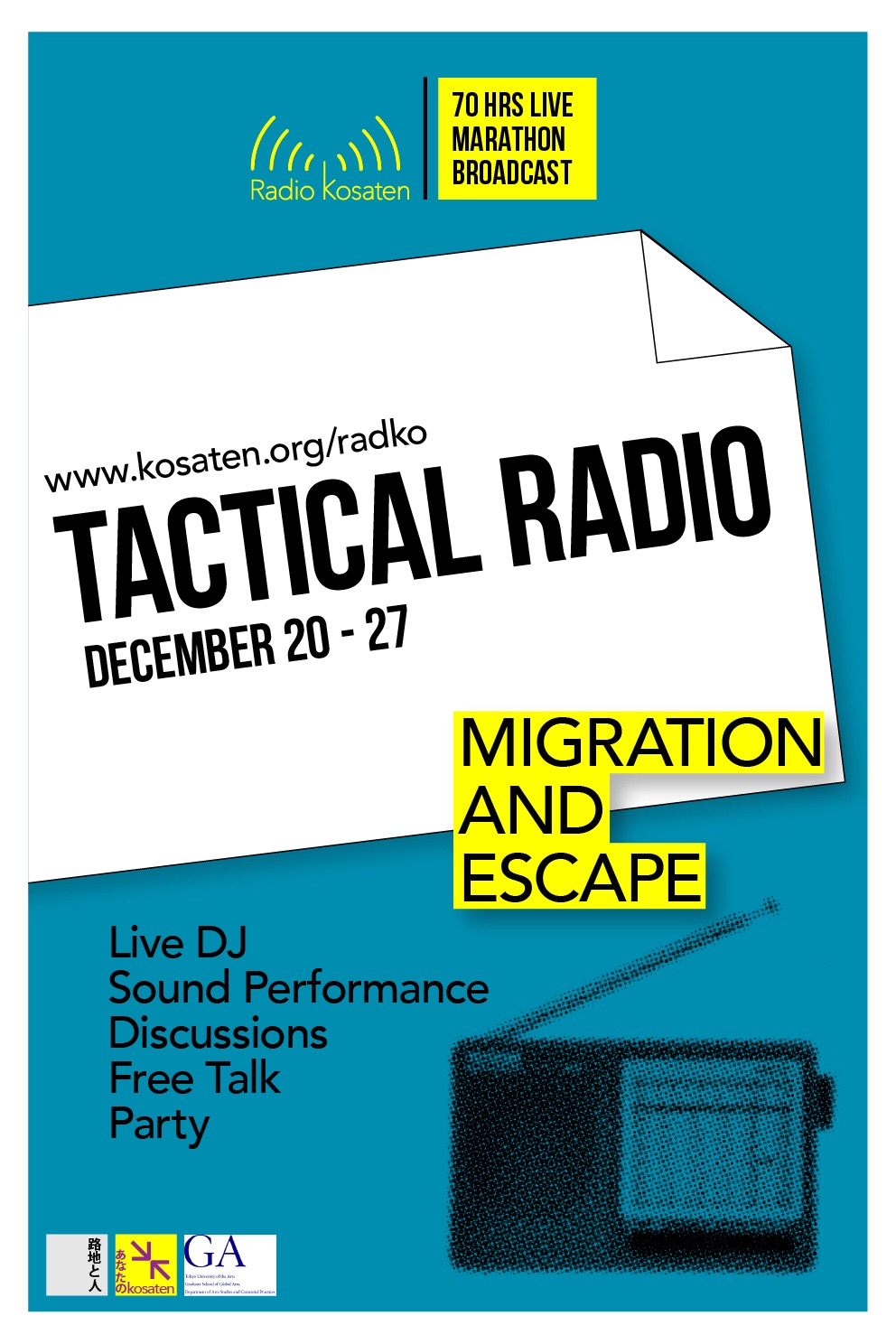 “Alienation is then considered not as the loss of human authenticity, but as estrangement from capitalist interest, and therefore a necessary condition for the construction – in a space estranged from and hostile to labor relations – of an ultimate human relationship.” Franco Beradi (The Soul on Strike, 2009)

Over the years prior to the turn of the century many has changed dramatically. The wall in Berlin that separates East and West Germany had collapsed. The Soviet bloc defeated and the Capitalist history turned to its end. Democracy had triumphed over dictatorship, however, thereafter a staccato of deregulations and economic restructuring let Western welfare states crumbling down. Regular employment ceased and in the following decades the rest of the workers and the generations to follow has to live and survive precariously on their own. In Japan the family-corporate system broke down allowing a “lost generation” to proliferate who mostly still look back at the glory days waiting for someday they relive the postwar abundant past, but to some they simply lost hope. Today, as precariousness escalate globally, estrangement and hopelessness has become a shared feeling and condition. But, as Judith Butler warned that without accepting the fact that our lives are precarious – that our bodies die and decay – we cannot understand the importance of life, and without grievability of lives lost there is no reason to celebrate life (Butler, 2010).

In the wake of contemporary politics and culture of death we ask ourselves, what hope do we get from hopelessness (is there any)? And as the disparity of estrangement widely grows, how do we grieve our precarious lives if we do not recognize the loss of other lives different from us and what are the radical possibility we get from estrangement with Capitalism? Accordingly, in this panel discussion we gather three researchers from different fields: Didi Han, a Geographer from South Korea, will discuss her research about precarious young people in Seoul who learned to support each other through Bin Zib; Barbara Cueto, researcher/curator, will share her thoughts about what tools are available for us to withdraw from capitalism; While, Sociologist Yoshitaka Mouri responds to each presentations as he relates it to his analysis and case study of the new cultural/political movement initiated by Japanese Freeters generations.

In an age when the workforce is increasingly divided, isolated and made invisible from each other, it seems ever harder to conceive of a strong and effective union movement. As irregular workers, temporary contracts and outsourcing reach new heights there are ever greater hurdles for such precarious workers to organize themselves. Many of us are working for several companies at the same time, working different shifts and in different places from our colleagues, and in the case of foreign trainees in particular are even denied the recognition as workers all together.

In this panel discussion we attempt to touch upon the reconceptualization of the union in times of mass precarity and examine how labour groups go about organizing themselves in the face of the ever more solitary, uninformed and vulnerable worker.

Inviting unions which specialize in support for freeters, emotional labourers, migrant workers and foreign trainees we consider the socio-political conditions which brought about the founding of such unions, their structure and strategies,  key cases and the pressing issues facing the precarious workforce in Japanese society today.

Featuring Yoshi Mouri
Yoshi Mouri obtained his PhD in Sociology and his M.A. in Media and Communications from Goldsmiths College, University of London. His first degree was a B.A. in Economics from Kyoto University. He is currently Professor of Sociology and Cultural Studies in Tokyo University of the Arts. His research interests include sociology, media studies, cultural studies and contemporary art.

Featuring DJ Mixnoise and gra/Full
A black man named Rafael Braga was arrested in Rio de Janeiro, Brazil on 2013 June, while passing by one of the massive protest against increasing public transport fares that were occurring at that moment nationally. He was accused of carrying materials to make molotov cocktails, but all he had was a cleaning product. Still he was sentenced to 5 years of prison. Later when he was in semi-open prison (He came home with electric GPS device and had curfew) he was arrested again and charged for drug possession and trafficking, although neighbor’s witness proves he did not carry any bag that should be necessary to hide the drugs that police said it was Rafael’s possession. For this accusation, he was again sentenced to 11 years of prison. Rafael was recently changed to home prison to treat tuberculosis, but as soon as he is recovered he would be transferred back to prison. We decided to host an event to help him win real freedom.

Sorrowful Voices in the Debris of Radio Waves is a mixture of live DJ and (non-)music performance: mystical ritual for nothing, dark ambient for negation, abandoned melodies sung by soulless voice, etc.

Sadookesa in C. is a concoction of sound samples interrupting Terry Riley’s “In C” piano piece with Japanese folk song Sado Okesa. The sound performance is paired with a light installation by Artist Taira Ichikawa.

Featuring Goso Tominaga with Taira Ichikawa
Born in 1963 in Sumida-ku, Tokyo, Goso Tominaga became a contemporary photographer and have been making images of the unseen life of the city since the early 1990s. Taira Tachikawa is a contemprary sculptor who works with lights and electronics.

In this event Tsurumi Wataru – writer, will share and discuss about his recent book “０円で生きる (To Live By 0 Yen)” in a free talk interaction with live audiences. The discussion will circle around different approaches and practices in anti-capitalist lifestyle. Everyone are free to join and discuss with us.

Ion Yamazaki will ask several questions related to Narsiso’s artistic practice and his life in general. Narsiso is a MFA candidate at California State University Long Beach and originally from Oaxaca, Mexico. His work depicts the life of immigrant workers (both himself and people whom he met in his life) in the United States. In his recent works, he deconstruct/reconstruct flattened used cardboard boxes, paints a scene filled with field workers and then puts them up on the wall. In this interview, we will ask how migration/escape affected his life and how it eventually shaped his artistic practice.

Tsubame is an organization founded by migrants from different countries and diverse backgrounds, living in Japan, along with Japanese nationals, with the hope of making it a better home for all. We are hoping to connect with the wider Japanese society, by disseminating information about our daily lives as members of this society and the diverse communities which we form a part of, whilst also highlighting the particular obstacles and issues faced by foreign residents at the same time.

Ion Yamazaki will ask Namshil several questions related to her Zainichi background while walking around the neighborhood she grew up in. Namshil is Ion’s coworker, who went to Chosen Gakkou—school for students of Korean descent in Japan—before going to public high school in Tokyo. In this interview, I am going to take a glance at her personal story of being Zainichi in the 21st century while we walk and talk at the same speed.

“This process of breaking dominant languages of power is crucial to providing the way towards the coming community, rendering inoperative the linguistic machine on which modern politics is based.”

Ion YAMAZAKI, originally from Niigata, Japan is a visual artist currently based in Tokyo. He received his BFA in Sculpture at California State University Long Beach before moving to Atlanta to complete his MFA in Sculpture at Georgia State University in 2015. In addition to his frequent participation to various exhibitions in Atlanta, Yamazaki was part of FLUX NIGHT 2013 and SOMA Summer 2014 in Mexico City. Having worked as a part-time instructor at Georgia State University’s Ernest G. Welch School of Art & Design, he relocated to Tokyo in 2016.