Lecture Series
Arts, City and Community in the Age of Globalization

Facing globalization, in what way are changes occurring in the arts, cities and in communities?
We will invite international curators and sociologists to participate in three lectures in the fields of curation, art management, sociology and cultural studies. In this way, we hope to grapple with this global context from multiple perspectives and through three differing approaches. 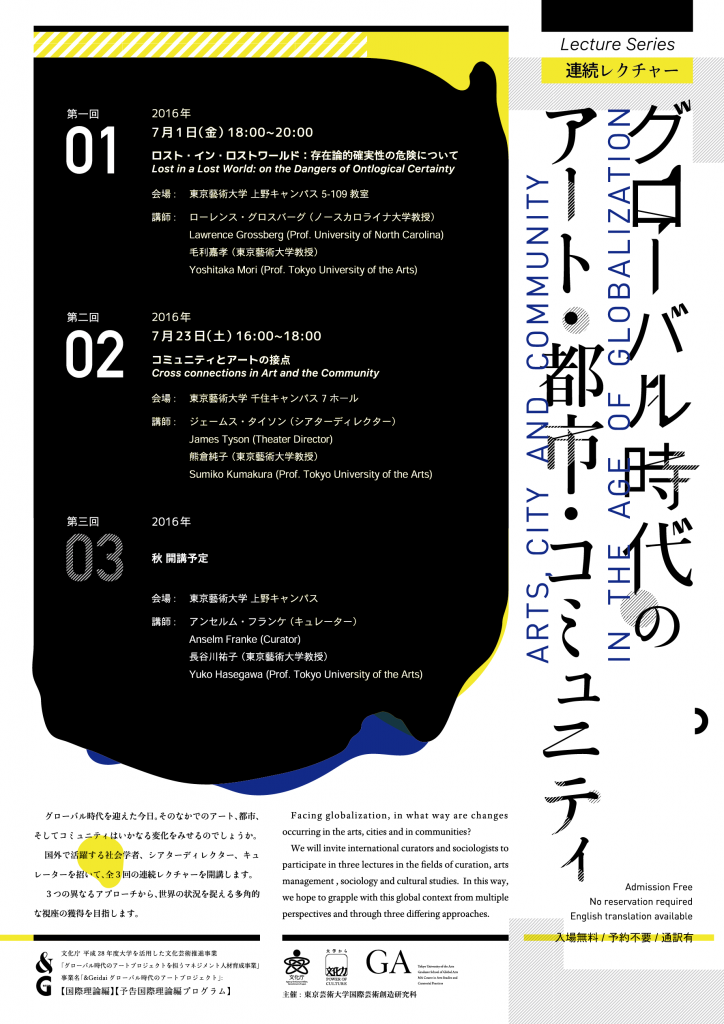 The 1st Session
Lawrence Grossberg
“Lost in a Lost World: on the Dangers of Ontological Certainty”

Lawrence Grossberg is the Morris Davis Distinguished Professor of Communication Studies and Cultural Studies, at the University of North Carolina Chapel Hill. His books include We Gotta Get Out Of this Place: Popular Conservatism and Postmodern Culture, Media-Making, Dancing in Spite of Myself: Essays on Popular Cutlure, Bringing it all Back Home: Essays on Cultural Studies, Caught in the Crossfire: Kids, Politics and America’s Future, and Cultural Studies In the Future Tense. His co-edited books include Marxism and the Interpretation of Culture, Cultural Studies, Without Guarantees: Essays in Honor of Stuart Hall, and New Keywords: A Revised Vocabulary of Culture and Society. He has published over 200 essays, and his work has been translated into over a dozen languages. He has edited the international journal Cultural Studies for twenty-five years. He has won numerous awards from the National Communication Association, the International Communication Association and the University of North Carolina, for scholarship, teaching and mentorship. His has written about cultural studies, continental philosophy and cultural theory, popular music and politics, the state of youth/youth culture, U.S. political culture (new conservatisms and capitalisms, and progressive opposition), value theory, multiple modern. His newest book, We All Want to Change the World, addresses the failures of the intellectual left in the U.S., is available free online. He is currently competing two books: Wrestling with the Angels: Culture, Ontology, Affect, Time, and An Introduction to Philosophy for Theory.

James Tyson is a performance-maker and producer based in London. He is co-founder of Intangible Studio, an artistic project making performances and other cultural works, including International Performance Festival Cardiff (2014). From 1999-2011 he was Head of Theatre/Theatre Programmer at Chapter Arts Centre, Cardiff, Wales, UK which from the 1970s became one of Europe’s leading centres for experimental theatre and cross-disciplinary art. At Chapter he presented the work of many artists from Wales and internationally, including from Japan, Gekidan Kaitaisha, Yubiwa Hotel, chelfitsch, Hirata Oriza/Seinendan, anti-cool as well as the touring intercultural collaborative projects Dream Regime (2004-2011) led by Gekidan Kaitaisha, and Aomori Project (from 2008) by choreographer Sioned Huws organised with Aomori Contemporary Arts Centre and ARTizan. Since 2004 he has performed and made artworks with the New York downtown performance scene, working with Richard Maxwell and artists from New York City Players and with Sarah Michelson. Other collaborations include with Ranters Theatre (Melbourne), Alajotas Dance Company (Ibadan), Theatre Replacement (Vancouver) and with the artists Jennie Savage, Davida Hewlett and Shirotama Hitsujiya. He also serves on the advisory board of the IETM International Performing Arts Network.