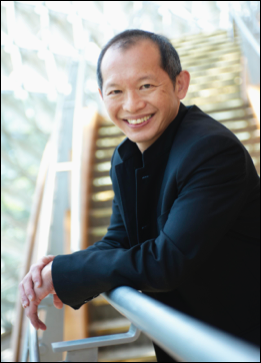 Benson Puah joined The Esplanade Co Ltd (TECL) in July 1998 as its Chief Executive Officer. He was responsible for the overall development, management, programming and artistic direction of Esplanade – Theatres on the Bay, one of the world’s busiest performing arts centres.

Benson brought to Esplanade a passion for the arts matched by an international business perspective and an established career in green-field projects. He led the team at Esplanade to build up an annual calendar of quality programmes that spanned all genres with a special focus on community access and arts education. Since its opening in October 2002, Esplanade has staged 41,000 performances attended by 28 million patrons and visited by 98 million visitors. The foundation he set for Esplanade continues to fulfill its vision as a centre for everyone. Benson handed over management of Esplanade to his deputy in August 2018, after years of succession planning grooming the next generation of leaders, to bring Esplanade to its next phase of development.

Prior to Esplanade, Benson had 20 years of experience specialising in pioneering hospitality projects. An honours graduate in Hotel, Catering and Tourism Administration from the University of Surrey, United Kingdom, he embarked on an international career in the hospitality industry with leading luxury hotel companies in many of the major US, European and Asian cities.

Benson then ventured into the public sector, as Chief Executive of Sentosa Development Corporation. There he spearheaded the repositioning of Sentosa as an attractive island resort getaway for Singaporeans and tourists and was involved with the master planning of Sentosa Cove, a prestigious residential waterfront development. His next position was as Chief Executive Officer of Temasia Health Pte Ltd, the international business and management arm of Health Corporation of Singapore, a government-linked company.

In 2009, concurrent to his position as CEO of TECL, the parent Government Ministry overseeing arts and culture appointed Benson as Chief Executive Officer (CEO) of the National Arts Council (NAC), an appointment that he held for 2 terms over 4 years. At that time, he was also the long serving Chair of the Association of Asia Pacific Performing Arts Centres (AAPPAC) and the first Asian Chairman of the New York-based International Society for the Performing Arts (ISPA). Benson had also served in numerous Boards and committees including the founding Board for the Yong Siew Toh Music Conservatory, School Of The Arts, The National Gallery, Singapore amongst many others. He was also active in businesses having served on the founding Boards of listed companies such as Parkway Trust Management Ltd (Parkway Life REIT), Ascendas Hospitality Fund Management and Ascendas Hospitality Trust Management (AHTrust).

In April 2010, Benson was presented with the title Chevalier in the Ordre des Arts et des Lettres by the French government for his contributions to the arts in Singapore. In 2013, ISPA conferred on him the Patrick Hayes Award for his leadership in the arts and in 2015 AAPPAC awarded the first Lifetime Achievement Award for his leadership and service. For three years since 2016, Benson has been recognized as a Distinguished Patron of the Arts, the highest level of recognition for individuals, for his personal donations to the arts.